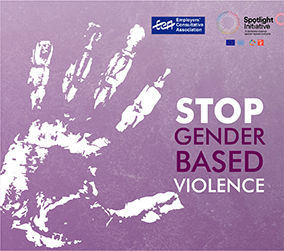 [ARANGUEZ, 25 September 2021] — “Gender- based violence (GBV) in all of its forms, must end in T &T, regardless of gender – male or female, or nationality. This is the firm position taken by the Employers’ Consultative Association.”

This statement was echoed on Thursday 23rd September at a sensitisation session hosted by the Employers’ Consultative Association of Trinidad and Tobago (ECA) to end gender- based violence within the workplace, as part of the Spotlight project being undertaken in Trinidad and Tobago. Launched in September 2017, the Spotlight Project is a multi-year programme funded by the European Union (EU), in collaboration with the United Nations, and represents an unprecedented global effort to invest in gender equality with the ultimate goal of ending gender-based violence.

Over sixty (60) small, medium, and large businesses across Trinidad and Tobago were present at this session which sought to raise awareness on the importance of recognising gender-based violence as a problem that can impact employees, employers, and the workplace.

It is within this scope that the ECA is participating as an implementing partner in the Spotlight Project for T&T, with the ambitious, but critically important task of sensitising employers about the harmful impacts of gender-based violence and ensuring that systems and policies are put in place to mitigate these impacts.

At Thursday’s session, employers were exposed to extensive information which examined the scope of gender-based violence and its manifestation within the workplace.

Dr Gabrielle Hosein, Senior Lecturer at the UWI Institute of Gender and Development Studies, emphasised in her presentation that “To understand gender-based violence we must first understand gender norms and the ways in which they contribute to reproducing inequalities between men and women.” She further articulated that, “Whenever violence occurs, it comes back to these norms around what is expected and allowed of men, and what is expected of women and how women are disciplined when they challenge, they try to escape, and they try to redefine…”.

Dr Hosein also highlighted the severity of gender-based violence as a workplace issue. In citing a 2018 National Women’s Health Survey conducted by the Inter-American Development Bank (IADB), she highlighted that 32% of women in the private sector reported experiencing violence. Furthermore, 67% of women in the private sector reported one or more variation of mental distress. “Those women are coming to work every day. They are not going to services but are coming to our workplace.”

Sabrina Mowlah- Baksh, General Manager of the Coalition Against Domestic Violence (CADV) also provided an overview on some concerning statistics around gender-based violence within Trinidad and Tobago. She noted data which shows that, 1 in 3 women in Trinidad and Tobago experience gender-based violence and this data is magnified by various risk factors such as ongoing conflict, substance abuse and lack of healthy communication between partners. Citing that one of the highest risk factors that warranted concern was the number of women whose partners are controlling, Mowlah-Baksh pointed out that these women are four (4) times more likely to experience violence when compared to women without controlling partners.

Mowlah- Baksh, also highlighted other worrying statistics, such as 1 in 3 victims not disclosing abuse to anyone, and as many as 69% of victims not seeking help. She also shared on the various trends observed by the CADV within recent times, such as an increase in reporting during the COVID- 19 Pandemic – especially during periods of mandatory lockdowns, with more males presenting as victims, perpetrators seeking support, an increase in the number of survivors seeking legal support, and survivors presenting with multiple needs such as basic necessities and housing.

Kwasi Gill, Case Manager at the Family Planning Association of Trinidad and Tobago (FPATT), emphasised the need to recognise that gender-based violence can have various psychosocial impacts on employees and subsequently, the workplace. Gill underscored that gender-based violence intersects with mental health and can put workers at greater risk of post-traumatic stress disorder (PTSD), depression, anxiety and suicidal behaviour and various forms of self-harm. He also disclosed that gender-based violence, regardless of where it occurs, can significantly impact the working lives of employees, often manifested in undesirable behaviours such as excessive absences, a lack of focus, and reduced output which can in turn have an overall impact on the productivity of organisations and ultimately, their viability and reputation.

Participants were also apprised of the ongoing global shift in labour policy to address violence within the workplace by Erica Martin, Labour Law Specialist from the International Labour Organisation (ILO), who discussed the ILO’s newest international standard, Convention 190 and Recommendation 206 on Violence and Harassment in the World of Work. Martin described this standard as a ‘rights-based’ framework which calls on member countries to put in place, laws and policies which can address and reduce violence and harassment within the workplace. She also emphasised the importance of Convention 190 in ensuring a safe workplace was guaranteed to all, especially women. “Convention 190 was seen as a means of addressing violence and harassment, which not only harms health and dignity but can prevent persons, particularly women, from accessing, remaining and even advancing in the labour market.”

As the session ended, participants were reminded about the need to actively address issues of workplace violence and create safe spaces within their workplaces. The ECA’s Interim CEO, Stephanie Fingal, issued a call to all employers to make a firm decision on taking a zero-tolerance stance towards gender-based violence within the workplace across Trinidad and Tobago. In exhorting employers to act, she added, “If it is occurring in your workplace, make a decision today to stop it! Declare it in your workplace, we are against gender-based violence and any time it occurs, it will be addressed decisively.”

For further information, kindly contact:
Ronald Ramlogan
Public Relations and Research Department
Telephone: 675-9388, 638-6463 ext. 242 | E-mail: This email address is being protected from spambots. You need JavaScript enabled to view it.